I wrote an article earlier this month about The ABC Vault and if it’s worth it so figured I’d talk about another large chain’s reward program to try and get allocated whiskey… Total Wine Grand Reserve.  Similar to ABC, you spend money with the allure of getting rare and allocated whiskey.  So let’s skip the back alley favors and get right to it.

What is Total Wine &More Rewards?

&More Rewards is Total Wine’s loyalty reward program. There are whispers of secret tiers above Grand Reserve but those appear to be nothing more than hearsay. The Total Wine website gives the inclination the program could be different in each state by making you choose your state first so I’m focusing on Florida specifically. They do make this note though:

Like with the ABC Access program, you get points based on what you spend. The default is 10 points for every dollar with point bonuses of 2x, 3x and 5x on specific items throughout the year. Sometimes they’ll even do 8x or 10x but it’s possible that’s stopped now.

What is Grand Reserve? 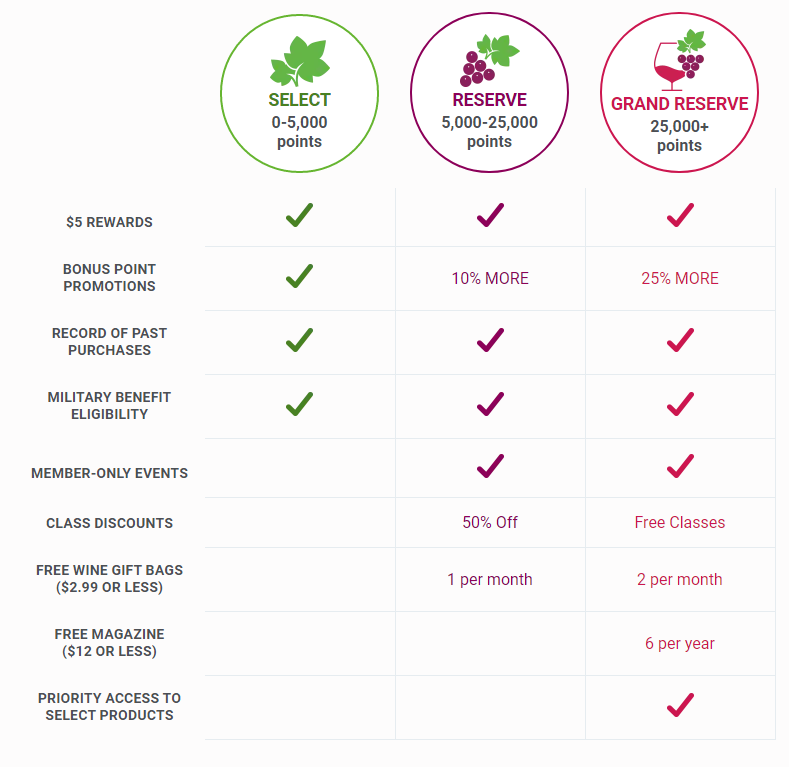 Grand Reserve is the top tier offering the most rewards for your patronage with Total Wine. You need 25,000 points to get Grand Reserve which seems daunting at $2,500. It will be even less for future years if you continue since you get 25% more points as Grand Reserve but that is still $1,875 if you don’t utilize the points bonus. Essentially you could wait for a 5x points and spend the same $500 you would at ABC and get Grand Reserve.

Total Wine arguably has a much larger winery direct selection making it easier to have more selection for the bonus points when those promotions come up.

In addition to getting invited to the allocated whiskey lottery at Total Wine, you get some fun additional perks that you may or may not use.

Okay, so is Grand Reserve worth it?

As I stated in the other rewards program, it depends. It depends how you value it all. I have two Grand Reserve accounts and haven’t won an allocated whiskey yet since they’ve revamped their system in how this is run. It used to be first come, first serve style with the fastest click to get the bottle they wanted. Now it’s kind of a crap shoot and up to luck.

For 2020, I won’t likely have two accounts qualify at the end of the year for 2021 because I’m not guaranteed anything and it has certainly cut my spending down with Total Wine because of it. But I snag the free wine bags for gift bags because you can never have enough and they take up no space.

I also use the free wine tasting classes a bit with my wife to try new wines I wouldn’t otherwise try. It does feel like a corporate push of specific bottles for them to use in the class and there’s not much straying from what corporate wants you to do but I could write an entire article just about Total Wine Classes that I won’t get into. For free though, nice perk for sure.

Summary: I wouldn’t do it just for a chance of winning a rare whiskey.

How Could Grand Reserve be Improved?

I would give the edge to ABC’s Vault at this point for better reward program but they both have their pro’s and con’s.  I think if you merged these two styles together you would have a really, really good reward program that people would like. Total Wine puts out decent products on the shelves and saves the priority access for actual rare items such as BTAC, Pappy and other really hard to get stuff and lets customers stop in to get Blanton’s, Eagle Rare, Michter’s 10, etc.

I would love to see a first come first serve email approach for the allocated stuff like they used to do vs a crazy lottery we have no idea how they even select the winners from.